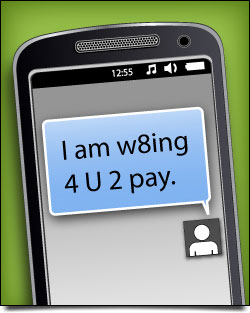 Complexities of text-messaging are more than what meets the eye.

I was recently asked to translate a few words, which apparently included some offensive language. No problem, I jumped right on it and translated, giving some insight about the cultural use of those words, but in general just translating the word from Portuguese to English.

A few days later, the same client asked me if I was willing to depose as an expert witness on the case involving the foul language previously translated. With some skepticism of what could be asked of me, I requested to be provided with a full version of the conversation that included those words. The client did as requested, and as I looked through the conversation, I saw that more than half of the supposed offensive language was simply part of a regular chat between two adults who were indeed using offensive language, but not in an offensive manner.

Furthermore I came across lots of misspellings, sarcasm and shorthand, which were all very circumstantial at best. Considering the context and perceivable tone of the conversation, I was able to advise the client that more would be needed in order to prove misconduct in the workplace. My advice was well received and they researched and found additional supporting evidence, which ultimately helped them win the case.

In situations such as these, experience comes in as a valuable asset. Had I not known what the intended use of that translation was, I would never be able to raise a red flag. Having worked on both sides (plaintiff and defense), I gained enough experience to pick up on “small” details that make a “big” difference. Any bilingual can translate, but it takes a professional linguist to pick up on nuances and deliver the appropriate message.

Thanks for taking the time to read this brief note, and I hope I have helped you to make a wiser decision.